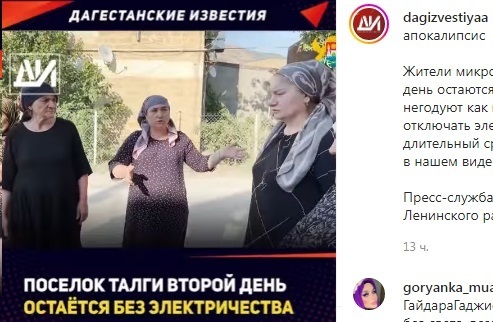 For several days already, the Makhachkala neighbourhood of Talgi faces problems with the supply of electricity, which also caused a failure of the pumps that supply water, local residents have complained.

The "Caucasian Knot" has reported that residents of Makhachkala have repeatedly complained about problems with the supply of electricity and water. Thus, on July 18, several hundred people blocked traffic in the Reduktorny settlement of Makhachkala in protest against frequent blackouts.

Talgi has no electricity for several days, as a result water pumps stopped working, and the neighbourhood was left without water, says the video story by the "Dagestan" RGVK (Republic's State Broadcasting Company) posted in the evening on August 5 in the "dagizvestiyaa" Instagram* public.

Neighbourhood residents have repeatedly appealed to various authorities. "People are outraged; they all have refrigerators and air conditioners in their apartments. We call the dispatchers; they say that repair works are underway, but in fact we see no repair works. We call the hotline – the same answer, 'work are underway; your application accepted', and there are no results," a local resident said in the video.

This article was originally published on the Russian page of 24/7 Internet agency ‘Caucasian Knot’ on August 6, 2022 at 07:36 am MSK. To access the full text of the article, click here.