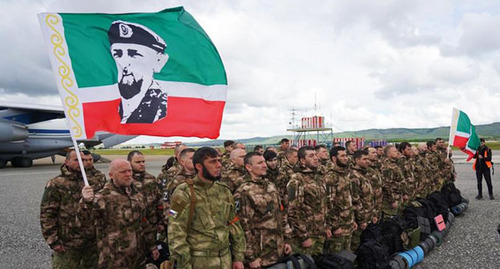 Call for rally against mobilization spread in Chechnya

An audio message by a mother urging women to gather for a rally in front of the Main Mosque in Grozny and oppose sending their sons to Ukraine has been circulated among Chechen WhatsApp users.

The "Caucasian Knot" has reported that Chechen authorities are positioning their republic as the main supplier of fighters to be sent to Ukraine. The fighters from Chechnya sent to Ukraine are obligated to take an oath "to wage gazavat in the name of Allah." On September 18, members of the Chechen Diaspora held a series of solo pickets in Vienna against sending Chechen fighters to Ukraine.

The author of the above audio message speaks on behalf of the Chechen mothers, whose sons were sent to Ukraine and "perish for no reason in a foreign country." Speaking in the Chechen language, the mother addresses other women, urging them to go "to the square in front of the Main Mosque in Grozny."

"If we don't save our sons, no one will save them. (...) They killed us in two wars, aren't there enough dead, mutilated and crippled?" asks the woman, whose appeal was translated by a source of the "Caucasian Knot". She claims that "men are forcibly taken from their own homes."

"The death machine is increasing momentum; and our lack of will and cowardice, our silence are playing against us," the author of the appeal has stated.

This article was originally published on the Russian page of 24/7 Internet agency ‘Caucasian Knot’ on September 21, 2022 at 00:29 am MSK. To access the full text of the article, click here.