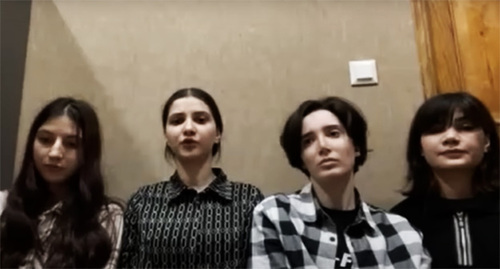 The four sisters from Dagestan who fled domestic violence are safe in Georgia, but the threat of persecution by their relatives has not ended; the girls need psychological help, human rights defenders believe.

The "Caucasian Knot" has reported that on October 29, Russian border guards in North Ossetia refused to let the sisters from Dagestan into Georgia and kept them until their relatives arrived. The girls themselves claimed that they were beaten up at home and forced to marry. On October 30, the girls were let to Georgia, where they are now in a safer place.

But they don't feel absolutely safe because their relatives can persecute them in Georgia, said Alexandra Miroshnikova, the press secretary of the SK SOS Crisis Group.

According to her story, in the near future the girls plan to "have a rest, perceive that they are safe and only then think about what to do next." She thanked the media and human rights defenders who "helped and publicized" the girls' story.

The "Caucasian Knot" has reported that the chairman of the council of Imams of Kaspiysk attributed the escape of Dagestani girls to the influence of social networks, in which recruiters convince young people to leave their families.

This article was originally published on the Russian page of 24/7 Internet agency ‘Caucasian Knot’ on November 3, 2022 at 08:25 pm MSK. To access the full text of the article, click here.