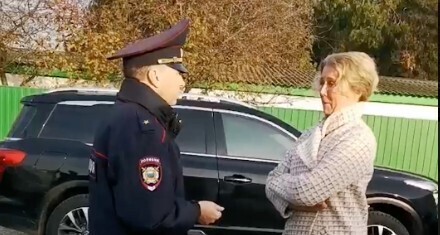 The spouses, Natalia Garyaeva and Vadim Motovilov, who are fighting against the garbage dump in the village of Poltavskaya, have filed a complaint with the Prosecutor's Office against the policemen who tried to take them by force to court from the kindergarten.

Commentators on the Telegram have treated the attempt to detain the activists as authorities' pressure, and law enforcers' actions as an excess of their service powers.

The road to the landfill (dump) passes through all the streets of the village, on both sides of which there are private houses. Garbage trucks with trailers drive along these streets around the clock, disturbing the residents' peace, although the authorities had promised to make a bypass road and even installed prohibited signs for the movement of large vehicles, Sergey Salnikov, an activist, has explained. On September 5, activists blocked the road to the dump, demanding authorities' attention.

Vadim Motovilov said that about a dozen policemen surrounded the kindergarten, frightening not only children, but also adults. "Soon, my wife Natalia Garyaeva drove up. They began force her into the car too, stating that they would take us to the court. My wife and I refused to go," said the activist.

Natalia Garyaeva has noted that law enforcers said they were not arresting them, but the spouses should "voluntarily go" with them to the court.

Vadim Motovilov has sent an application to the Prosecutor's Office against the policemen demanding to "conduct a check of the policemen's illegal actions" who "had tried to illegally detain me and my wife." "By their actions, they drove my wife to a nervous breakdown; her ex-husband recently shot himself, also because of the pressure exerted on the family by law enforcement bodies," the application states.

On October 5, 2022, Andrei Garyaev, an activist of the movement "Poltavskaya Against Landfill", was found dead in the yard of his own house in the village of Maryanskaya, Igor Scherbatsky, a journalist, has informed. According to his version, Garyaev had committed suicide amid the court judgement that imposed a multi-million fine on his company "Kamavtoresurs". Opponents of the landfill have linked Andrei's death with the protests against the landfill and pressure from the authorities.

Mr Scherbatsky has added that "there are no changes in the landfill."

This article was originally published on the Russian page of 24/7 Internet agency ‘Caucasian Knot’ on November 19, 2022 at 00:23 am MSK. To access the full text of the article, click here.

Wheelchair invalid fined in Kuban for protest against dump, Activist finds slander in statements voiced by official at gathering in Poltavskaya, Opponents of landfill in Kuban outraged by official’s threats against an activist.