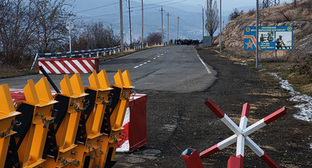 The development of the armed conflict in Northern Caucasus; sentencing of the Arashukov grouping; the scandals around Chechen authorities, – read about these and other events that happened in the Caucasus during the week from December 26, 2022, to January 1, 2023, prepared by the "Caucasian Knot".

On December 26, agents of the Russian FSB (Federal Security Service) found two armed men in a forest near Nalchik and demanded to surrender; however, the men opened fire on the agents and were killed by return fire. The FSB stated that the casualties were earlier convicted Russian citizens who, "on the instructions of Ukrainian special services," were preparing a terror act in the city of Chegem, and then planned to leave for Ukraine to take part in the battles against Russian troops. Firearms, ammunition and an improvised explosive device (IED) were seized from the venue of the shootout.

Persecutions of pacifists and activists in Southern Russia

In Southern Russia, they continue persecuting the residents who oppose the special military operation (SMO) in Ukraine. Sergey Rusanov was fined by 30,000 roubles for his comment in the "VKontakte" social network. According to investigators, he posted a comment that the grandchildren of those who fought in the Great Patriotic War began looking like those against whom their grandfathers had fought. At the trial, Rusanov stated that he was against any murder and violence, and not against the army, therefore he did not discredit it, but this argument was not taken into account.

According to Vadim Ilov, an advocate, a court in Astrakhan found the events used by law enforcers in Astrakhan to explain the detention of Yuri and Galina Shevtsov as "actually fictitious," according to the above Mr Ilov. On December 27, it became known that the journalists, Idris Yusupov, Sergey Ainbinder, Yulia Vishnevetskaya and Vladimir Sevrinovsky, had appealed to the Dagestani branch of the Investigating Committee of the Russian Federation (ICRF) with a demand to investigate law enforcers' actions during their detention at the protests against mobilization held in Makhachkala.

On December 27, an investigator forced Vladimir Atamanchuk, a Sochi pensioner, against whom a criminal case had been initiated on discrediting the Russian Army, to interrupt his medical treatment and appear for interrogation. The pensioner, despite feeling unwell, reached the building of the Department of Internal Affairs, where they had had to call an ambulance for him. Evgeny Kirichenko, another Sochi resident, was fined on December 31 for a photo of a solo picket with a pacifist comment.

On December 27, the Moscow City Court (MCC) announced the verdict to Rauf Arashukov, a former senator (member of the Federation Council) from the Karachay-Cherkessian Republic (KChR), and his father, Raul Arashukov; both were sentenced to life imprisonment.

Kazbek Bulatov, an ex-head of the KChR branch of the Investigating Committee of the Russian Federation (ICRF), and Timur Betuganov, a former head of the republic's centre for combating extremism of the Ministry of Internal Affairs (MIA), were sentenced to 22 years in prison each. Andrei Filippov, a former investigator for especially important cases of the above branch of the ICRF, was sentenced to 6.5 years in prison.

Guzer Khashukaev, a former director of a branch of the "Gazprom Mezhregiongaz Stavropol" LLC, was sentenced to five years in prison. The criminal case against other 14 members of the criminal community is still being considered.

Khizir Boranukov, the KChR's Minister of Industry, Energy and Transport, who figured in the gas theft case, was sentenced to one and a half years of conditional imprisonment.

Blockade of Nagorno-Karabakh becomes a routine

For 21 days already, Azerbaijani eco-activists continue blocking the Lachin Corridor – the only road connecting Nagorno-Karabakh with the external world. This led to foodstuff shortages and stopped the work of intercity transport and medical teams. Residents of the unrecognized republic welcomed the New Year under the blockade.

The command of Russian peacemakers continues negotiating with Azerbaijan and Armenia on the resumption of the motor traffic along the Lachin Corridor, the Russian Ministry of Defence (MoD) has informed. Nagorno-Karabakh believes that the crisis can be resolved by providing Russian peacemakers with an international mandate, David Babayan, the Acting Minister of Foreign Affairs of Nagorno-Karabakh, has suggested.

The Lachin Corridor, blocked for traffic since December 12, is the responsibility zone of Russian peacemakers, Nikol Pashinyan, the Armenian Prime Minister, recalled at a meeting with Russian President Vladimir Putin on December 26.

Amid the special military operation (SMO) in Ukraine, authorities of most regions of Southern Russia banned mass celebrations of the New Year, with the exception of festive events for children. Mayors of several cities also changed the format of welcoming the New Year. The administration of Grozny cancelled fireworks and a concert in the central square; and the Mayoralty of Makhachkala refused to hold fireworks.

Awards and scandals of Chechen officials

Law enforcers have beaten up a native of Chechnya who arrived in Croatia and sent him to a closed camp. Complaints were also received from other people from this camp, human rights defenders have stated, demanding from the Croatian Prosecutor's Office to punish those responsible.

On December 29, Ramzan Kadyrov stated that the residents of Chechnya, who take part in the SMO in Ukraine, had gone there voluntarily, and single women are not able to raise their sons as a real man without husbands. Some Instagram* users responded by suggesting that Kadyrov stop sending men from Chechnya to Ukraine.

On December 26, Khasan Ibragimov, the Kadyrov's representative in the Kherson and Zaporozhye Regions, was detained in Simferopol on suspicion of beating up a young man who stood up for his girl in a restaurant. Information about the detentions of permanent representatives of the head of Chechnya in connection with various offenses has more than once become public knowledge. The "Caucasian Knot" has collected information about such cases.

The "Team Against Torture"** received responses to 37 out of 68 letters containing facts of torture in Northern Caucasus sent to various authorities and law enforcement bodies. The letter sent to Magomed Daudov, Speaker of the Chechen Parliament, was sent back with an anonymous note containing insults attached thereto.

On December 28, Kadyrov received a medal of the "Rosgvardiya" (Russian National Guard) for strengthening combat and military cooperation, including with other countries.

This article was originally published on the Russian page of 24/7 Internet agency ‘Caucasian Knot’ on January 2, 2022 at 09:00 am MSK. To access the full text of the article, click here.