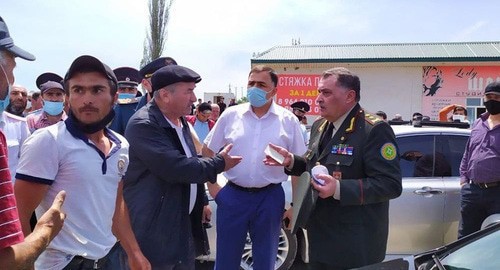 After detaining those, who took part in clashes with law enforcers, and a departure of a group of Azerbaijani citizens home, some 250-300 people remain in the tent camp near the Dagestani village of Kullar.

The "Caucasian Knot" has reported that on June 15, the citizens of Azerbaijan, who are waiting for their departure to homeland near the Azerbaijani border in Dagestan, staged a protest action. The acting head of the Derbent District said that four law enforcers were injured in the clashes.

A group of 155 Azerbaijani citizens have left home in buses the temporary accommodation centre (TAC) set up on the border of the Derbent and Magaramkenst Districts, the press service of the administration of the Derbent District Dagestan has reported. Next week, another group of Azerbaijani citizens will depart home, the press service wrote on the Instagram.

Asim Tagiev was among those, who left the camp on Tuesday (June 16). He said that the June 15 action began spontaneously. According to his story, about 50 people were injured.

The operative headquarters under the Cabinet of Ministers of Azerbaijan has reported that the return of citizens from abroad, including from the Russian Federation, is carried out by stages, as soon as quarantine centres are ready to accept them.

This article was originally published on the Russian page of 24/7 Internet agency ‘Caucasian Knot’ on June 17, 2020 at 08:05 pm MSK. To access the full text of the article, click here.

Azerbaijanis' protest on Dagestani border grows into clashes with law enforcers, Azerbaijani citizens suspend their hunger strike in camp on border of Dagestan, Hunger strikers in Dagestan demand to return them to Azerbaijan.