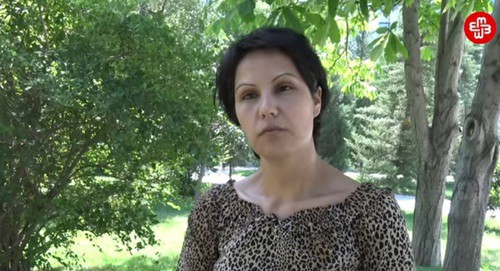 The Neftchala District Court of Azerbaijan has accepted a lawsuit against the activist Vafi Nagi. She believes that the libel charge is untenable, since her criticism of the head of the municipal council "fits into the freedom of expression."

The "Caucasian Knot" has reported that an official and workers of a rural house of culture had filed a lawsuit against Vafi Nagi, a member of the municipal council of the village of Khol Garagashly, Neftchala District. They demanded to bring her to criminal liability for defamation, referring to Nagi's Facebook posts and claiming that she had damaged their business reputation. The activist herself has linked the lawsuit with her activities to "expose the facts of corruption."

The preparatory court session on the claim against Vafi Nagi took place on August 21.

According to the activist herself, the judge offered her to delete the posts about Salimov, calling him a respected person. "In this case, the judge promised me assistance in reaching an amicable agreement. Of course, I rejected this," said Vafi Nagi.

She recalled that she spoke in the social network against corruption in the allocation of land in the village. "I did not offend anyone; and my corruption allegations are based on local residents' complaints. They and I have sent 60 complaints to law enforcement bodies about corruption in the municipality. Unfortunately, they were not properly considered and resulted in no investigations," Ms Nagi has stated, adding that the judge decided to accept the case for consideration and scheduled hearings on the merits for August 27.

This article was originally published on the Russian page of 24/7 Internet agency ‘Caucasian Knot’ on August 22, 2020 at 10:16 am MSK. To access the full text of the article, click here.