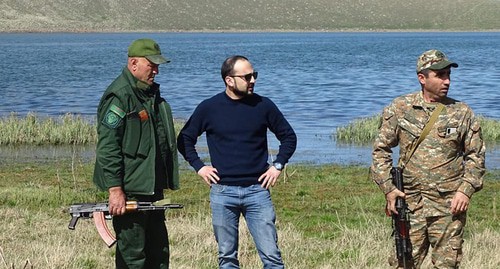 The demarcation of the Armenian-Azerbaijani border is possible after the establishment of diplomatic relations by both countries, but first it is necessary to define the maps based on which the demarcation will be made.

The "Caucasian Knot" has reported that Sergey Lavrov, Russian Foreign Minister, said that in order to resolve the conflict, Armenia and Azerbaijan should create a commission for defining the border; and Moscow is ready to act as a mediator.

The demarcation is an extremely complex process; it can last for decades, said Alexander Iskandaryan, Director of the Caucasus Institute. According to his version, the countries' good-neighbourly relations are necessary to succeed in this process, while Armenia and Azerbaijan have not settled the Karabakh conflict, and they gave no diplomatic relations.

Negotiations on diplomatic relations can be conducted, but it is unrealistic to expect a solution to the problem as soon as possible, the political analyst believes.

Tevan Pogosyan, Executive Director of the International Centre for Human Development, also believes that the border demarcation can be carried out only after the establishment of diplomatic relations. In his opinion, the authorities who signed the capitulation are unable to influence the situation.

Ara Papyan, a political analyst and the head of the "Modus Vivendi" Centre, has noted that the establishment of diplomatic relations does not mean the recognition of borders. At the same time, he has treated the border conflict as an attempt to put pressure on Armenian authorities.

This article was originally published on the Russian page of 24/7 Internet agency ‘Caucasian Knot’ on May 20, 2021 at 07:17 am MSK. To access the full text of the article, click here.