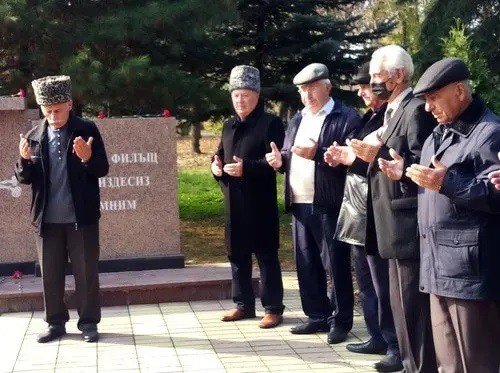 After their return from exile, the repressed residents of the Kabardino-Balkarian Republic (KBR) failed to receive compensations for their seized or lost property; now they are paid only a small surcharge to their pensions, Marx Shakhmurzov, the head of the Association of Victims of Political Repressions, has stated at a rally held in Nalchik.

The "Caucasian Knot" has reported that the Remembrance Day of Victims of Political Repressions has been marked in Russia on October 30 since 1991.

On October 30, in Nalchik, in the Atazhukin Garden, a rally was held at the monument to the victims of political repressions with the participation of about 30 people. Among those present were two KBR's MPs and an Ombudsperson's representative. Mr Shakhmurzov opened the rally and recalled that in the 1920s and 1930s, as a result of political repressions, the entire elite of the Kabardian and Balkarian nations was eliminated. "A lot of people were executed. We must not forget it. These are our grandfathers and our great-grandfathers. They perished absolutely innocently," Marx Shakhmurzov has stated.

After the return of those repressed, they were not returned their property and received no compensations; and now they receive no essential help from the state; this is unfair, Mr Shakhmurzov said. "There are only ten people left in our organization from among those repressed. They are very old and sick; they practically don't go out. Nobody helps them. And when they die, we come and bury them, because often there is no one else to do it. I am offended for these people. Our country is the richest one, but it can't these people in any way, although this very country once repressed them," he has emphasized.

This article was originally published on the Russian page of 24/7 Internet agency ‘Caucasian Knot’ on October 30, 2021 at 08:21 pm MSK. To access the full text of the article, click here.