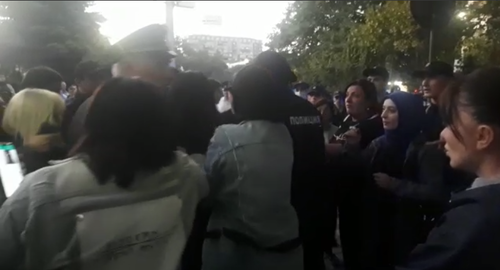 Law enforcers have detained the "Caucasian Knot" correspondent and took him away from the venue of the action staged by mobilization opponents in Makhachkala, the capital of Dagestan. The correspondent has reported at least seven badly beaten detainees were transported in the car with him, one of whom, an 18-year-old boy, was all covered with blood.

On September 25, in Makhachkala, law enforcers violently dispersed a protest against the partial mobilization announced by President Vladimir Putin. Among the detainees was the "Caucasian Knot" correspondent, who came there to cover the events.

"Police units quickly arrived at the venue and began to severely detain those who had gathered. They used force on some of them, beat them, knocking them down to the floor," the correspondent told about what he saw.

This article was originally published on the Russian page of 24/7 Internet agency ‘Caucasian Knot’ on September 25, 2022 at 05:58 pm MSK. To access the full text of the article, click here.