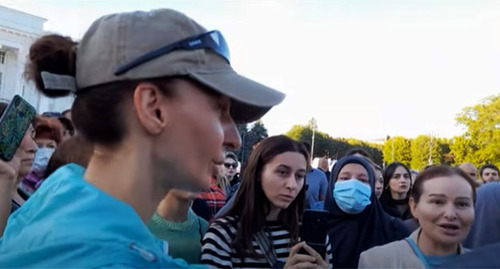 The court of appeal did not grant a complaint filed by Sakima Khushtova, a resident of Nalchik, about her fine for discrediting the Russian Armed Forces. The statements voiced by the woman at a rally against mobilization did not discredit the army, the defence pointed out.

The “Caucasian Knot” has reported that on September 27, the court fined Sakima Khushtova, a resident of Nalchik, 30,000 roubles, finding her guilty of discrediting the Russian Armed Forces. According to the police’s version, Sakima Khushtova stayed on the square where the protest action against the mobilization was taking place, and she “expressed her erroneous judgments, thus demonstrating her clear disregard for the policy being pursued by the authorities.” The woman explained that she spontaneously took part in the rally on her way home.

On September 25, in Nalchik, female participants of a protest action demanded from the authorities not to mobilize their relatives and stated that men without professional military skills should not be allowed to be sent to Ukraine. On the other day, officials went out to the participants of a new protest action against the mobilization. However, instead of answering questions about the mobilization, the officials accused the protesters of taking PR steps.

The Supreme Court (SC) of Kabardino-Balkaria upheld the fine imposed on Sakima Khushtova for her statements voiced at a national gathering in Nalchik on September 26, the Human Rights Protection Centre “Memorial” reports on its Telegram channel.

According to the complaint, the woman did not have a goal to discredit the Russian Armed Forces. Sakima Khushtova only expressed her disagreement with the methods of the mobilization. In particular, the woman spoke about cases of conscription of the persons who were not subject to the mobilization by law.

Advocate Sultan Telkhigov pointed out that Sakima Khushtova’s statement voiced as: “We are mothers, and we don’t want to fight” in no way discredit the Russian Armed Forces.

This article was originally published on the Russian page of 24/7 Internet agency ‘Caucasian Knot’ on November 14, 2022 at 04:52 pm MSK. To access the full text of the article, click here.

Rights defenders demand to stop persecuting anti-mobilization protesters in Nalchik, In Kabardino-Balkaria, women come out to protest against mobilization, In Nalchik, women demand to mobilize children of officials.