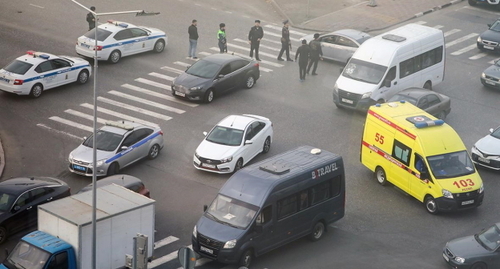 The attack on a policeman in Grozny, which resulted in the murder of a man armed with a knife, was preceded by a similar incident that occurred in the capital of Chechnya in July 2021. Since 2019, there have been at least five attacks with bladed weapons on law enforcers committed in the republic.

The "Caucasian Knot" has reported that Ramzan Kadyrov informed that on November 21, an unknown man was shot dead in Grozny after he attacked a traffic police (GIBDD) inspector with a knife and tried to escape with the inspector's service pistol. The inspector has died; now, the identity and motives of the attacker are being investigated.

According to the "Caucasian Knot", the attack on a law enforcer in Chechnya was the first in more than 16 months. The previous similar incident took place in Grozny on July 9, 2021.

On that day, according to the Investigating Committee of the Russian Federation (ICRF), a man born in 1993 attacked the policemen, who were on duty, with a knife. After the warning shots failed to stop the attacker, the policemen opened fire on him. The man was wounded and died at hospital. The policemen were not wounded.

There is no longer any organized underground in Chechnya, but it is beneficial for the republic's authorities to support the status of a troubled region in order to receive funding for their fight against terrorism, Caucasian experts pointed out then. In his turn, Sergey Goncharov, the president of the "Alfa" Veterans' Association, has objected that armed incidents harm Kadyrov's image.

This article was originally published on the Russian page of 24/7 Internet agency ‘Caucasian Knot’ on November 21, 2022 at 12:50 pm MSK. To access the full text of the article, click here.

Policeman attacked and killed in Grozny, Armed incident in Chechnya is the second in 2021, Stabbing law enforcers in Grozny was the eighth attack in NCFD since May 2018.