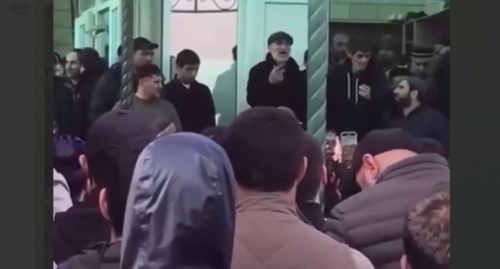 Relatives of the 19-year-old Magomed-Ali Sultanov fear that the attackers on him will escape punishment, the Dagestani Ombudsperson has informed. According to investigators, the attacker was alone, but from the posted video it follows that four men took part in the brawl.

The Ombudsperson has reported about his meeting with the casualty's parents in his Telegram channel. "According to Magomed-Ali's relatives, as a result of a domestic conflict, several men had attacked him and inflicted multiple stab wounds. His friend was beaten up," he has reported, adding that only one of the attackers has been detained, the rest are still at large.

The video of the gathering in the village of Kayakent was posted by the "Dagestan Live" Telegram channel. "In the Kayakent District, the parents of the murdered local resident state that those guilty of their son's death can escape punishment," says the caption to the video. It also alleges that relatives were offered large sums of money "for their silence".

Meanwhile, investigators assert that the attacker was alone.

This article was originally published on the Russian page of 24/7 Internet agency ‘Caucasian Knot’ on November 25, 2022 at 10:53 am MSK. To access the full text of the article, click here.

Investigators ask to arrest a teen after road accident in Krasnodar, Woman from Alagir pickets demanding inquiry into her son's murder, Suffered party demands tougher punishment for murderer of activist in Tarki.