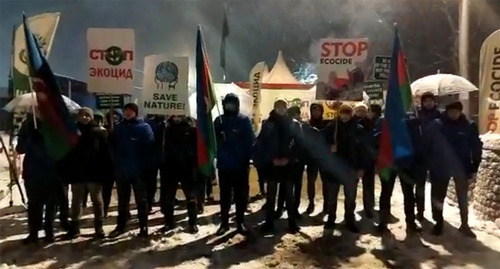 Hunger strike declared by prisoner of conscience Tofig Yagublu, critical consequences of the blockade of Nagorno-Karabakh, sharp deterioration in the Mikhail Saakashvili’s health, and persecution of pacifists and activists in Southern Russia, – see the review of these and other events in the Caucasus during the week of January 2-8, 2023, prepared by the “Caucasian Knot”.

Persecution of pacifists and activists in Southern Russia

Tofig Yagublu was arrested for 30 days after his detention on December 23 at a protest action held with the demand to release activist Bakhtiyar Gadjiev. Tofig Yagublu was charged with petty hooliganism and failure to obey a police order. On January 5, in Baku, a court dismissed the complaint filed about the arrest of Tofig Yagublu. In protest, he declared a hunger strike. On January 7, his spouse Maya Yagublu joined the hunger strike. On the other day, Seimur Akhmedsoi and Elnur Guliev, activists of the Popular Front Party of Azerbaijan (PFPA), went on a hunger strike in solidarity with the opposition politician.

Tofig Yagublu is the former deputy chairman of the “Musavat” Party and a member of the coordinating centre of the National Council of Democratic Forces (NCDF). He was repeatedly imprisoned. The international human rights organization “Amnesty International” (AI) recognized Tofig Yagublu as a prisoner of conscience.

Critical consequences of blockade of Nagorno-Karabakh

The Lachin Corridor linking Nagorno-Karabakh with Armenia and the outside world has been blocked for four weeks now. The blockade of the road has led to a shortage of food in the region and has affected the work of transport. Shelves of the stores in the regional villages and towns are empty, and only from time to time the stores receive food products from the reserve fund. According to pharmacists, there is a shortage of medicines in pharmacies.

The need to introduce a food distribution system was announced by Nagorno-Karabakh State Minister Ruben Vardanyan. On January 8, activists of the “National Democratic Pole” movement held a protest action with a plan to surround the 102nd Russian military base and block all entrances and exits from it as a sign that Karabakh was also blocked and the Lachin Corridor should be opened. Armenian law enforcers did not let the protesters to approach the building of the Russian military base, and 65 activists were detained.

The defence of Mikhail Saakashvili, the third president of Georgia, has repeatedly announced the threatening state of his health. During the first week of 2023, the Mikhail Saakashvili’s condition deteriorated sharply. Giuli Alasaniya, a mother of the politician, said that her son was in very poor condition and would not be able to attend the court hearing to be held on January 9.

On January 5, Eka Kherkheulidze, an MP from the “United National Movement” (UNM) Party, who visited Mikhail Saakashvili in a clinic in Tbilisi, reported that the politician was regularly losing consciousness. Advocate Shalva Khachapuridze demanded to expedite the trial in connection with the poor health state of his client.

Giorgi Margvelashvili, the fourth president of Georgia, who was the political opponent of Mikhail Saakashvili, spoke in favour of a postponement of the execution of the sentence. Giorgi Margvelashvili believes that no discussion of “the crimes committed or not committed by Mikhail Saakashvili” can be justified now. The fourth president of Georgia recalled that he had signed a letter for postponing the sentence of the third president, which was supported by many former members of the government and top-ranking officials in Georgia.

This article was originally published on the Russian page of 24/7 Internet agency ‘Caucasian Knot’ on January 9, 2022 at 08:35 am MSK. To access the full text of the article, click here.