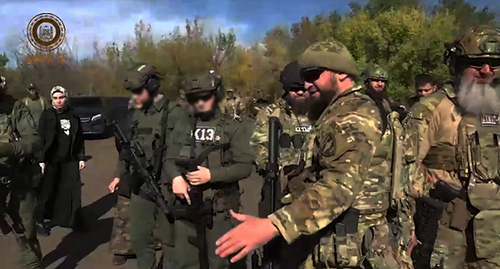 The children of the leader of Chechnya, who went to the zone of the special military operation, have been shown the trophies captured in Ukraine. Meanwhile, Ramzan Kadyrov has assured that his sons are ready “to join the battle right now.”

The “Caucasian Knot” has reported that Ramzan Kadyrov’s three minor sons starred in a propaganda piece on the “Grozny” TV Channel from Mariupol and posed for a photo for the press service of the leader of the Donetsk People’s Republic (DPR), who awarded their sister Aishat Kadyrova with an order. Earlier, Ramzan Kadyrov has announced that his sons are preparing to be sent to Ukraine, where they will say on the most difficult sections of the combat line. Chechen leader’s statement caused bewilderment among social media users.

Chechen law enforcers have shown the children of Ramzan Kadyrov the trophies captured during the special military operation in Ukraine, follows from a video posted on the Telegram channel of the leader of Chechnya. The video shows machine guns and grenade launchers lying on the ground. “Akhmat, these are trophies (pointing to weapons). Enemies were killed the day before yesterday and yesterday, and the weapons were seized,” says a man in military uniform.

In the video, Akhmat, Eli, and Adam, the sons of Ramzan Kadyrov, are posing in full gear, with machine guns in their hands. “They are determined and ready to fight with the enemy right now,” Ramzan Kadyrov wrote in the description of the video.

The leader of Chechnya reported that his children talked to the fighters of the “Zapad-Akhmat” battalion and officers Ismail and Rustam Aguev.

This article was originally published on the Russian page of 24/7 Internet agency ‘Caucasian Knot’ on October 19, 2022 at 07:07 pm MSK. To access the full text of the article, click here.