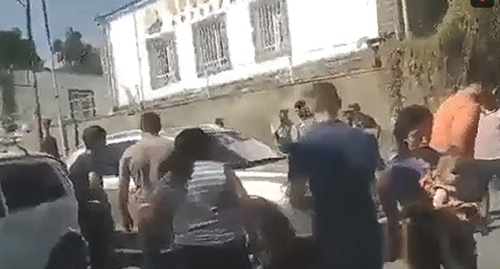 Residents of Karabakh villages outraged by demand to leave their homes

Residents of Berdzor blocked the road after a meeting with the Minister of Territorial Administration and Infrastructures of Nagorno-Karabakh, at which the official announced that the people are to leave their houses in the communities of Berdzor, Akhavno, and Sous by August 25. The protest action of the residents stopped after the authorities promised that the government of Nagorno-Karabakh would assist in the move.

The "Caucasian Knot" has reported that on July 29, the Armenian Ministry of Territorial Administration and Infrastructure announced that in August the construction of a road bypassing the Lachin Corridor and linking Nagorno-Karabakh with Armenia would begin.

According to the agreement signed by Aliev, Pashinyan and Putin, Armenia transferred the territory of the Lachin District to Azerbaijan. In June 2022, the Azerbaijan State Highway Agency reported that the construction of the 32-kilometre-long Azerbaijani section of the road continues at an accelerated pace and is scheduled to be completed this year. The transfer of Lachin (the Armenian name is Berdzor) under Azerbaijan's control was delayed due to the absence of an alternative road from Nagorno-Karabakh to Armenia. After the launch of this road, Lachin will be transferred to Azerbaijan, Azerbaijani experts explained in July.

Today, Hayk Khanumyan, Minister of Territorial Administration and Infrastructures of Nagorno-Karabakh has received the residents of the communities of Akhavno, Sous, and Berdzor in the Kashatag District. At the meeting, Hayk Khanumyan said that the residents of the communities needed to leave the villages by August 25, since the Lachin corridor would be handed over to the Azerbaijani side, the “Re:public of Artsakh” Telegram channel reported.

Anna Mangasaryan, a resident of the Sous community, noted that she was “outraged by such an attitude towards people.” “How can you just kick people out of their houses so easily? I’m just embarrassed. Where should we go, how will we support our family, and where will we live?” Anna Mangasaryan told the “Caucasian Knot” correspondent.

The residents of Berdzor blocked the road in protest. They demand that the Lachin corridor should remain under the protection of Russian peacekeepers and that people should not be forced to leave their houses.

The protest action began after a meeting with Minister Hayk Khanumyan, Berdzor Mayor Narek Aleksanyan confirmed. “The people blocked the road, as they were full of emotions. But after some time, when the city authorities talked to them and explained the situation, the people heard us. As a result, the road was opened,” the “Caucasian Knot” correspondent was told by Narek Aleksanyan.

“In the following days, the families must decide where they want to move in order for the government to help them move. Furthermore, the authorities of Nagorno-Karabakh and Armenia promised to provide financial assistance to all families who now live in Berdzor, Sous, and Akhavno,” Berdzor Mayor said.

This article was originally published on the Russian page of 24/7 Internet agency ‘Caucasian Knot’ on August 5, 2022 at 06:56 pm MSK. To access the full text of the article, click here.