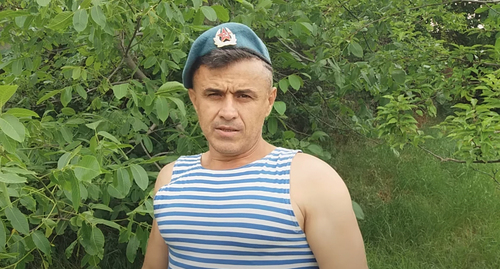 The “Caucasian Knot” has reported that on September 9, the police detained 51-year-old blogger Askhabali Alibekov, who was accused of repeatedly discrediting the Russian Armed Forces. At first, the pre-trial restriction measure was pronounced in the form of a recognizance not to leave, but investigators secured the arrest of Askhabali Alibekov after he had refused to wear a bracelet to track his movements, a spouse of the blogger said.

On May 12, it became known that Askhabali Alibekov was found guilty under the same article on discrediting the Russian Armed Forces, and then the blogger stated that he did not agree with the court’s decision. On June 8, another protocol against Askhabali Alibekov under the article on discrediting the Russian Armed Forces was submitted to the court after the blogger had posted a video with a pacifist appeal on the Internet.

“The article under which Askhabali Alibekov is being prosecuted actually prohibits belittling the authority of the government and undermining trust in it, its actions, thereby directly prohibiting the expression of opinion on the actions of the authorities,” the human rights defenders explained.

Let us remind you that after the responsibility for discrediting the Russian Armed Forces was introduced on March 4, residents of Russia began to be prosecuted. By October 26, Russian courts had received about 4800 administrative cases under the mentioned article, and the Krasnodar Territory entered the top ten regions where the most cases were instituted under the mentioned article.

This article was originally published on the Russian page of 24/7 Internet agency ‘Caucasian Knot’ on November 2, 2022 at 12:15 pm MSK. To access the full text of the article, click here.