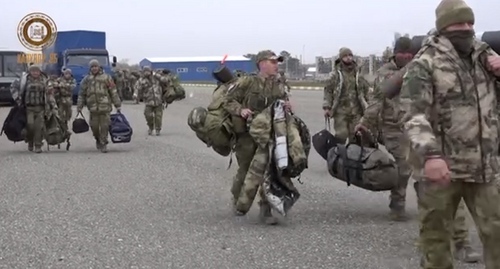 Kadyrov reports sending another group of volunteers to Ukraine

After training at the Russian University of Special Forces, another group of volunteers has left Grozny Airport for Ukraine, Ramzan Kadyrov has announced.

The "Caucasian Knot" has reported that on November 19, Kadyrov stated that volunteers "had already become the main driving force of the special military operation (SMO)."

On November 15, Magomed Daudov, the Speaker of the Chechen Parliament, said that since the start of the SMO, more than 20,000 Chechen fighters have been combated in Ukraine, more than 9000 are still there.

Another group of volunteers has left Grozny for Ukraine to take part in the SMO. They were seen off at the airport by Ruslan Alkhanov, the head of the Chechen Ministry of Internal Affairs (MIA), and his deputy, Aslan Iraskhanov, the boss of the Chechen Police, Ramzan Kadyrov wrote in his Telegram channel, adding that the fighters left for Ukraine on November 25.

"The Regional Public Fund named after the Hero of Russia Akhmat-Haji Kadyrov even pays them the way to Grozny. Upon arriving in the republic, they undergo high-quality combat training at the Russian University of Special Forces under best trainers. Knowing this, volunteers from all over Russia come to us," Kadyrov has written.

This article was originally published on the Russian page of 24/7 Internet agency ‘Caucasian Knot’ on November 27, 2022 at 07:55 pm MSK. To access the full text of the article, click here.